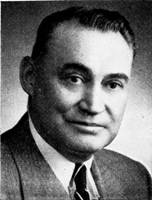 Mr. Risk graduated from Aurora High School and attended Upper Iowa University. He served in the Navy in World War I. He and Lydia Biedermann of Guttenberg were married in 1926 and moved to Independence. They had two sons, Donald, of Phoenix, Arizona, and Malcolm, of Independence. He and his second wife Ruth have a stepdaughter, Patricia Rand, of Balboa, Panama.

After leaving the Senate, Mr. Risk continued his business interests in real estate and insurance and also owned and operated the Rush Park Motel in Independence. He was treasurer of the Independence Savings and Loan Association for 26 years, a member of the Lions Club and the Sheehan Tidball American Legion Post #30.

NOW THEREFORE, BE IT RESOLVED BY THE SENATE OF THE SEVENTY-FIRST GENERAL ASSEMBLY OF IOWA: That in the passing of the Honorable Don A. Risk, the State has lost an honored citizen and a faithful and useful public servant, and that the Senate, by this resolution, expresses its appreciation of his service to his community, state and nation and tenders its sympathy and kindest regards to members of his family.

Sources:
Text above from 71 GA (1986) Senate Journal Memorial Resolution
Compiled Redbook Biographies
Information from State Historical Society of Iowa resources
All Biographies
Senate District 33
Committees
56th GA (1955)
Standing Committees
Legislation Sponsored
56th GA (1955)
Bills
Amendments
Floor Manager
Subcommittee Assignments
If you would like to get the permanent link to a url other than the page you are currently viewing you can paste a url inside of the destination box and hit regenerate
Destination:
Perma Link: