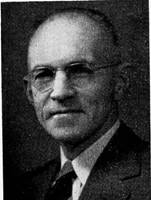 Mr. Speaker: Your committee, appointed to prepare a suitable resolution commemorating the life, character, and public service of the late Honorable Raymond Breakenridge, begs leave to submit the following memorial.

Raymond Breakenridge was born on August 17, 1897 to James and Helen Perkins Breakenridge, in Madison County, Iowa. On September 14, 1918 he married Vera Bowen of Chariton, Iowa. They had one daughter, Fern.

A Republican, Raymond Breakenridge represented Madison County in the Iowa House during the Fifty-sixth and Fifty-seventh General Assemblies.

Mr. Breakenridge died on August 4, 1982 in Louisiana at the age of 84. He is survived by his wife, Vera, and his daughter, Fern, both of Natchitoches, Louisiana, along with two grandchildren.

Now Therefore, Be It Resolved by the House of Representatives of the Seventieth General Assembly of Iowa, That in the passing of the Honorable Raymond Breakenridge, the State has lost an honored citizen and a faithful and useful public servant, and the House by this Resolution would express its appreciation of his service.

Sources:
Text above from 70 GA (1983) House Journal Memorial Resolution
Compiled Redbook Biographies
Information from State Historical Society of Iowa resources
All Biographies
House District 28
Committees
56th GA (1955)
Standing Committees
Former Memberships
Legislation Sponsored
56th GA (1955)
Bills
Amendments
Floor Manager
Subcommittee Assignments
If you would like to get the permanent link to a url other than the page you are currently viewing you can paste a url inside of the destination box and hit regenerate
Destination:
Perma Link: