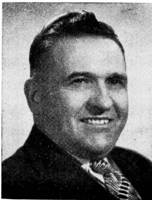 He lived in Cherokee County all his life, engaging in farming and livestock feeding for 39 years, retiring in 1967.

He was a Navy veteran of World War I , served on the Cherokee County draft board during World War II, and was an honorary trustee of Buena Vista College at Storm Lake.

He served in the Iowa House of Representatives from 1946 to 1952 and in the Iowa Senate from 1952 to 1960. He also served on the Iowa Parole Board for several years.

Now Therefore, Be It Resolved by the Senate of the Sixty-ninth General Assembly of Iowa: That in the passing of the Honorable Laurence M. Boothby, the State has lost an honored citizen and a faithful and useful public servant, and the Senate by this resolution would express its appreciation of his services to his community, state and nation and tender its sympathy and kindest regards to the members of his family.

Be It Further Resolved: That a copy of this resolution be spread upon the Journal of the Senate and that the Secretary of the Senate be instructed to forward an enrolled copy to the family of the deceased.

Sources:
Text above from 69 GA (1982) Senate Journal Memorial Resolution
Compiled Redbook Biographies
All Biographies
Senate District 46
Committees
56th GA (1955)
Standing Committees
Legislation Sponsored
56th GA (1955)
Bills
Amendments
Floor Manager
Subcommittee Assignments
If you would like to get the permanent link to a url other than the page you are currently viewing you can paste a url inside of the destination box and hit regenerate
Destination:
Perma Link: