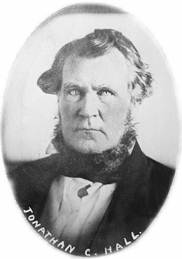 Born at Batavia, New York, February 27, 1808, and was reared on a farm. He attended district school winters and a few terms at Wyoming Academy. He taught school three winters and helped to survey several new counties. In 1828, he began to study law, removed to Ohio and was admitted to the bar of Columbus. In 1839, he came to Iowa Territory and a year later opened a law office at Mount Pleasant where in a few years he acquired a large practice, attending courts in eleven counties. In 1844, he was chosen a delegate to the First Constitutional Convention and was one of the prominent framers of the Constitution that was rejected. Soon after he removed to Burlington and in 1854 was appointed Supreme Court Judge to fill a vacancy. In 1855, he was elected president of the Burlington & Missouri Railroad Company and was one of the influential promoters of that line. In 1857, he was again a member of the Constitutional Convention which framed our present Constitution. He was one of the authors of the State Board of Education which were provided for in that instrument. In 1859, he was elected to the Eighth General Assembly and took a prominent part in the enactment of the Code of Iowa, 1860. In politics Judge Hall was a Democrat. As a lawyer, judge and legislator, he had few equals in the State he served so long and well. He died June 11, 1874.