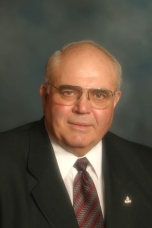 Jack Drake was born on July 29, 1934 at the family home south of Walnut, Iowa. He attended country school and graduated from Atlantic High School in 1952. He married Shirley Joan Bess on June 27, 1954 in Griswold and their union created four children.

After high school he attended the University of Iowa and in 1955 he began his career in farming. He was elected to the Iowa House of Representatives in the fall of 1992 and served until his death. He served eleven and half terms, including five extra sessions.

During his time as a legislator, his wife, Shirley was his clerk, working side by side with him here and at home.

Jack was a Republican from Cass/Pottawattamie County. During his time he served on the following committees: Chair of Agriculture, Agriculture and Natural Resource Appropriations, Vice-President of State Government, member of Appropriations, Ways and Means, International Relations, Economic Development, Energy and Environmental Protection. He served as a member of many Interim Study Committees and board and commissions.

NOW, THEREFORE, BE IT RESOLVED BY THE HOUSE OF REPRESENTATIVES OF THE EIGHTY-SEVENTH GENERAL ASSEMBLY OF IOWA, That in the passing of the Honorable Jack Drake, the State has lost an honored citizen and a faithful and useful public servant, and the House by this Resolution would express its appreciation of his service.

Sources:
Text above from 87 GA (2017) House Journal Memorial Resolution
Compiled Redbook Biographies
Information from State Historical Society of Iowa resources
All Biographies
House District 57
Committees
81st GA (2005)
Standing Committees
Appropriations Subcommittee
Permanent Statutory Committees
Former Memberships
Legislation Sponsored
81st GA (2005)
Bills
Amendments
Floor Manager
Subcommittee Assignments
If you would like to get the permanent link to a url other than the page you are currently viewing you can paste a url inside of the destination box and hit regenerate
Destination:
Perma Link: