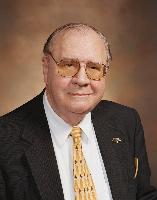 Joseph I. Hutter was born August 31, 1937 in Dubuque, Iowa. He graduated from Loras Academy, received an Associate Degree in Police Science from Black Hawk Community College and a Bachelor’s Degree in Law Enforcement Administration from Western Illinois University.

He served in the U.S. Navy from 1956 to 1958. On May 6, 1965 he was united in marriage to Barbara O. Roberts in Bettendorf and their union created three children. Joe served on the Bettendorf Police Department for many years retiring as a Captain.

As a tireless organizer and fund-raiser he was the former coordinator of the Scott County Sheriff’s senior volunteers, including finding funds for uniforms and a vehicle for them. He was involved in initiating the cellphone program for seniors where phones could be donated and refurbish them so they could call 911 only.

He served as a member of the statewide board of Hawk-I, President of the Mississippi Valley Fair Board where he served as a board member for almost 30 years. He was active with the Bettendorf Jaycees and Scott County 4-H clubs. A strong advocate for Scott County and eastern Iowa he focused on the advancement of Bettendorf community and was a great ambassador for Bettendorf.

Joseph was a Republican from Scott County. He was elected to the Iowa House of Representatives in the fall of 2002, serving two terms including three extra sessions. During his time he served on the following committees: Government Oversight, Human Resources, Judiciary, State Government and Veteran Affairs.

NOW, THEREFORE, BE IT RESOLVED BY THE HOUSE OF REPRESENTATIVES OF THE EIGHTY-SEVENTH GENERAL ASSEMBLY OF IOWA, That in the passing of the Honorable Joseph I. Hutter, the State has lost an honored citizen and a faithful and useful public servant, and the House by this Resolution would express its appreciation of his service.

Sources:
Text above from 87 GA (2017) House Journal Memorial Resolution
Information from State Historical Society of Iowa resources
All Biographies
House District 82
Committees
80th GA (2003)
Standing Committees
Appropriations Subcommittee
Legislation Sponsored
80th GA (2003)
Bills
Amendments
Floor Manager
Subcommittee Assignments
If you would like to get the permanent link to a url other than the page you are currently viewing you can paste a url inside of the destination box and hit regenerate
Destination:
Perma Link: