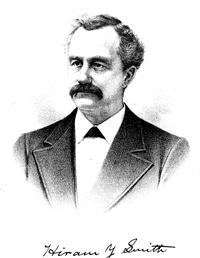 HON. HIRAM Y. SMITH died suddenly at his home in Des Moines, on the 4th of November. He was born in Piqua, Ohio, March 22, 1848, coming to Iowa in 1854. He graduated at the Albany, (N. Y.) Law School in 1866, and settled down in Des Moines to practice his profession. In 1875 he was elected District Attorney, which position he held four years. In 1881 he was elected to the State Senate from Polk County, serving with ability four years. In 1884 he was elected to Congress to fill a vacancy occasioned by the resignation of Hon. John A. Kasson. He was the founder and always the stanch friend of the city library of Des Moines. Mr. Smith had a large acquaintance in the State, and was highly esteemed as a useful and influential citizen.

Sources:
Text above from Volume 1 (1893-1895) Annals of Iowa Obituary
Information from State Historical Society of Iowa resources
All Biographies
Senate District 30
Committees
20th GA (1884)
Former Memberships
Legislation Sponsored
20th GA (1884)
Bills
Amendments
Floor Manager
Subcommittee Assignments
If you would like to get the permanent link to a url other than the page you are currently viewing you can paste a url inside of the destination box and hit regenerate
Destination:
Perma Link: